We lived by the baby monitor when the Jordan and Shelby were little. I would carry it around from room to room, plugging it in as I went, just in case something happened. Never mind that the square footage in our apartment was about size of some people’s walk-in closets, or that I could hear my neighbors when they were listening to yet another Grateful Dead song, I was always afraid that I might miss something that Other Baby and Other Baby were chatting about in the mornings. It was nothing earth shattering, but listening to them babble about a doll brought a smile to my face. Jordan’s cajoling Shelby into flipping the light switch on and off and their resulting fits of laughter was generally my cue to get them out of their cribs.

When the girls would wake up, the routine was to bring them into our bed and snuggle for a few minutes. They would climb all over the place, occasionally biting on the back of the headboard, bounce for a while, and then slip under the covers until it became painfully aware that no one was going to sleep. Sounds blissful, right? Truthfully, they “snuggled” so I could get a few more minutes sleep. In actuality, they were climbing on each other, chewing on the headboard, jumping on my back, and then telling me to turn my head the other way because my breath smelled bad. Ah . . . motherhood.

Our morning routines have changed a lot in the past 20 years. It’s been less “momcentric” for quite a while now. Since 1999, they’ve gotten up well after I was up and moving, and they have been perfectly capable of getting themselves dressed, fed, and out the door since then. It’s changed a bit here and there, and for the most part, they’ve been independent from a young age. Granted, I didn’t go as far as my mom and give them an alarm clock as a kindergarten present, but you get the idea. When they got in high school, I would frequently wake up to messages scrawled on the mirror reminding me of things that needed to be done. Not exactly the best way to communicate, but at 5:30 AM it sure beats attempting to wake a sleeping teenager.

Today begins a new chapter for our mornings. Shelby left for Germany last night. I don’t think that a baby monitor will reach all the way to Hamburg, and I’m 99% sure that her headboard biting days are long gone (and if they aren’t I don’t want to know). She’ll have to get herself up and dressed and fed and out the door. And just six short hours later, her sister will go through the same routine independently for the first time in 21 years. I kinda wish that there was a baby monitor just for them so Jordan could whisper one more time, “Shelby, Shelby . . . do it again.” 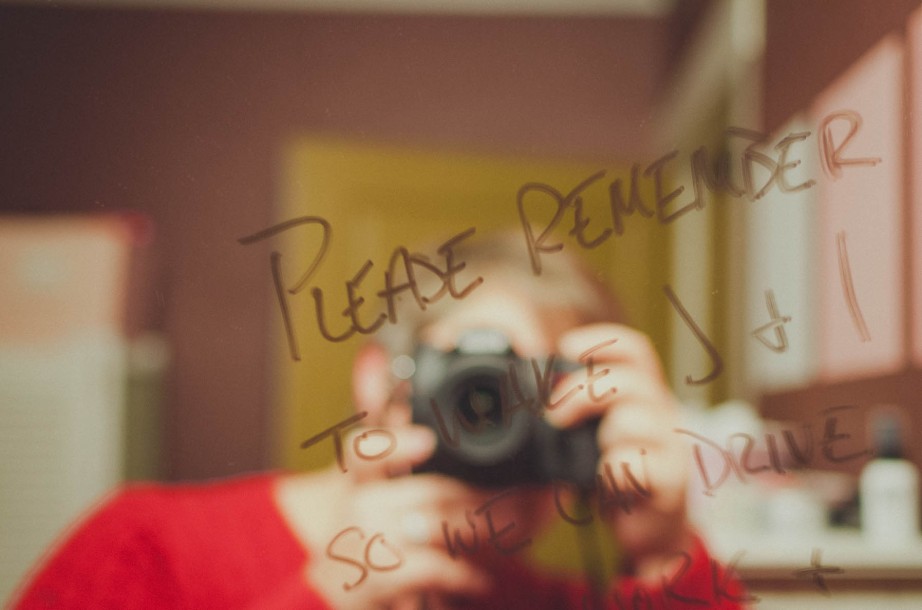 Have your routines changed in the past few years? Anything drastic? Or have your changes been more gradual?  Perhaps you, too, leave messages on the mirror as a reminder in the morning? I’d love to hear about them as I face my first morning parenting a child thousands of miles away. I have a feeling that I’m going to need all the routine I can get for a while.