how we do (or don’t do) breakfast.

i am  not a morning person. therefore, i will not, nor will i ever be the mom that whips up a kick ass breakfast every morning (at least not consistently). i like to wake up slowly, to linger in bed. because of that, the kids often beat me down the stairs in the morning. sometimes it’s by seconds, sometimes by minutes and on occasion it’s more minutes than i care to admit. our house is  small, so i can lie in bed and listen to them. sometimes there are giggles, sometimes there is arguing over who is touching who too much and this early in the day, etc.. other times i hear them foraging for food. luckily, their most oft requested sustenance in the a.m. is dry cereal (they rarely take it with milk) and they can easily get that for themselves. (and really, it’s more of an appetizer, since they’re grazers).

don’t get me wrong, this doesn’t mean i don’t offer to cook, i do. but, they have their favorites. dry cereal, frozen waffles still frozen (i chalk this up to their quirkiness, because i don’t get this at all) – sometimes with a side of fruit, eaten while sitting on the couch absorbing an episode of mr. bean. most days making breakfast is toasting a waffle and then slathering it with some peanut butter and honey. on those days, we’re usually heading to school, but enjoy lounging around for as long as possible.

in the midst of all this i’m usually just trying to guzzle coffee while it’s still warm (remember i am not a morning person , i tend to set my coffee down and forget about it), making lunches, brushing teeth, getting little people to put on underwear, pants at the very least. but, i love the morning when i have time to make myself a decent breakfast in the hopes that they want to eat what i’m having. (i don’t do frozen waffles still frozen). sometimes it works, sometimes it doesn’t. my favorite, eggs, seem to be off their menu lately.

then there are days where no one wants to eat, but they are ready to go go go and i might find myself mixing paint instead of pancake batter. these are the days when they roam around while eating, grabbing whatever suits them. i find myself stepping over the abandoned remnants. apparently, cracking open pistachios while wielding a sword to battle medusa at 9:00 in the morning is tricky business and takes a certain kind of finesse. one that none of us in this household possess.

and we have our days when we cook a big, hot breakfast, but i’ll admit when we do have those days, we eat late. technically, it would be brunch, but i’m not a fan of that word. sometimes it’s just the four of us, other times friends come by. they bring the biscuits, i cook a mean sausage gravy (or so i have been told), matt makes a killer pot of coffee or two. brunch schmunch. if it’s before noon it’s breakfast.

our breakfast times may be rather sporadic, unplanned and sometimes a free for all. but, there is something about this (dis)organized chaos that  makes me want to wake up and get the day started.  and it may or may not have some thing to do with witnessing amazing bedhead and living in a house full of goofballs. (of course, the coffee helps, too). 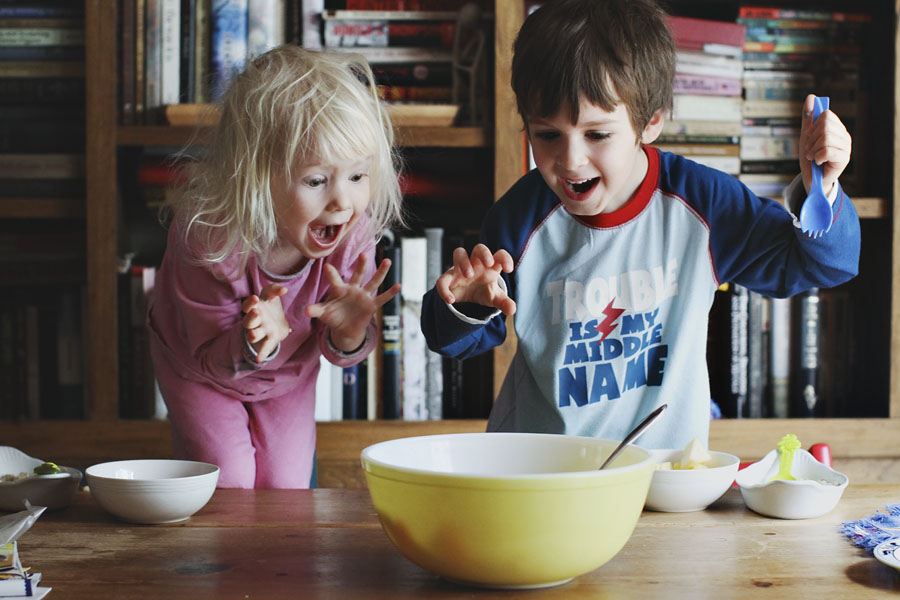 (they asked me to take this picture. i’m not sure if they’re supposed to be monsters on the prowl or if they are just really excited about that pineapple and watermelon. i’m guessing both).

are you a morning person? is there a breakfast routine in  your house? do you have a quickie go-to breakfast ?