Marriage. Or A Long Post About the Work of a Marriage with Kids.

I really wish when you start telling people you’re planning a family that married folks with kids would pipe up.  I wish instead of saying “Get your sleep now!” they’d say “Honey.  Listen up.  Marriage didn’t change my relationship.  Children did.  Don’t work hard to keep it the same because that’s a pointless battle.  You’re going to have to work really hard to evolve as a couple and to keep it together.  Oh and always feed the baby veggies first and then go with fruits.”  That’s what I wish people would say as they rub a pregnant lady’s belly.  But I’m guessing that if someone had told me, I’d nod my head and silently think: They’re wrong.  We’re different.  But no one told me that.  I didn’t have to fake listen to a wise woman’s advice.  Two years later, there was no one for me to say, “Damn Wise Woman, you were right.  I’m sorry I doubted you.”

Pre-kids, we could stay up late and I didn’t care if he was still sleeping until 10 a.m.  I actually enjoyed the alone time in the morning.  Pre-kids if we went to Target, we only went down the toy aisle if a new line was released.  And it was for a few minutes tops.  He never whined when I said “No” to a purchase.  Hell, I never said “No!”  Pre-kids we might have chicken for dinner.  Just chicken.  No fruits or vegetables.  Chicken.  Pre-kids we both had ample free time to invest in our solo hobbies.  Pre-kids we could see a movie he wanted and then my movie choice.  Pre-kids we could wait an hour for a table at our favorite restaurant.  Pre-kids if we fought, we could be also loud as we needed to be for our points to be heard.  Marriage was easy pre-kids.

I don’t think marriage got to be work until Cooper had very definite opinions maybe around two-ish.  Yes, my kid had opinions before two.  He liked the right boob over the left.  He loved reading Richard Scarrry books, but I could hide them and he’d move on.  Two hit and he was more independent.  He had opinions.  The kind of opinions that wore you down or the kind that made you stand your ground and look as irrational as a two year-old.  Those kind of opinions.  Plus there was just more to do.  Toddler and normal daily activities can be exhausting.  We had to have dinners with more than just chicken.  Our free time to devote to leisure activities was being whittled down.  By Year Two, all the time spent getting to daycare, doctors appointment, and sick days made Free Time feel like it was a mythical being.  Solo time felt amazing, but also could be resentful.  If Mark went to a movie, I wondered about my movie time.  It never seemed to happen because my friends never did movies.  After two years, that didn’t seem fair any longer.  When he slept until 9 a.m., I was pissed.  And when I slept until 9 a.m., he was pissed.  Two is when I realized that marriage was going to be work.  Since then, I’ve noticed it goes in waves.  Peaceful and steady.  And when one of us starts to take the other for granted, the waters get choppy and dangerous.  Last week, it was dangerous.  And it was my fault.

When I’m really busy with work, I want a break at home.  But that never happens.  I’ll come home from driving five hours and I’m bombarded with homework questions, dinner, grocery trips, and I usually step on a Lego.  He works all day and then pulls single Daddy duty when I’m away.  I know that’s hard work.  But when I’m in the midst of really busy work, I don’t care.  He’s supposed to take care of the kids.  He’s their father!  And that’s where I get in trouble.  It’s not appreciating him fully.  And if I want him to appreciate I’m working full-time and can still put dinner on the table at least four nights a week, I have to appreciate him.  Last week was a Two Hotels-in-a-Week week.  I can get particularly snippy and all Martyr-ish during those weeks.  I got home from the first hotel and was pissy.  We fought.  We went to bed pissy.  We woke up pissy and I drove to Michigan pissy.  He was pissy, but at home.

When I called from the hotel to check in, our anger was still alive.  I ate my dinner at the bar and a man came and sat next to me.  People love to talk when you eat at the bar.  This man told me his wife was about to retire from the FBI.  When I asked what she was planning to do with her free time, he said she’s a quilter.  Finally, someone I wanted to talk with.  He said she loves to make t-shirt quilts.  “My husband really wants one, but I have no desire to make one” I said.  He asked me why.  I listed my reasons: sewing on knit scares me, wanting to quilt makes me finish the quilt, and I love fabric not t-shirts.  He paused and said, “You should really make your husband that quilt.  It’s a nice quilt to have.”  He said good-bye.  I was still too mad at my husband to even entertain making him a quilt.  He was lucky I was coming home.

I woke up, worked, and drove home.  During the four hours back, I couldn’t get the stranger’s voice out of my head.  And that’s when I realized that I behaved like a big ole bitch.  And marriage was like that damn t-shirt quilt.  We do nice things for each other because parenting is hard work.  I didn’t want to make it, but he would really love it.  And that’s exactly why I had to do it.  It wasn’t going to kill me.  I wasn’t changing my morals by making a quilt.  I wasn’t saying, “I’ll do whatever you want from now on.”  It was simply a nice thing to do.  It was only a little time and work.  He deserves that.

The waters of our marriage will always flow from peaceful to choppy and back again.  Sometimes he’s the reason we’ve got waves and sometimes it’s me.  Right now, there’s no other person I want on my boat.* 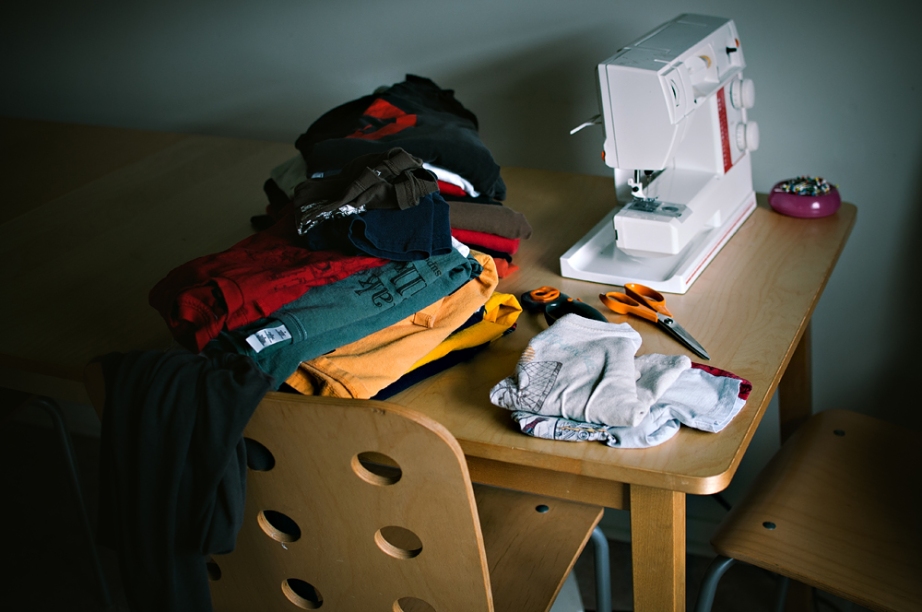 *I reserve the right to change that because he could be a huge asshole next week.  Can’t we all go from sweet to assholely in a week’s time?