This wasn’t the post I had intended, not even by a long shot. I had intended to write about how sometimes your plans don’t work out the way that you intend and you deviate from the path that you have chosen for yourself. You know, the one where you wind up sleeping with your friend in the middle of a field and find yourself the mother of two exceptionally wonderful albeit unplanned daughters nine months later and then get married. Happens to everyone, right? But no . . . that is not today’s post. Today is a love song to reading and choosing whatever the hell you want to read.

Yesterday, Maurice Sendak died at the age of 83. If you’ve been living under a rock, then you might not know that he was the author and illustrator of countless children’s books, including my own favorite Where the Wild Things Are. It’s a slim volume, one that most people overlook for its power and message. It’s also a book that was frowned upon in my house when I was little. My mother hated the book for one simple reason: Max. Because Max told his mother to “hush” after being sent to his room, my mom viewed him as a brat and didn’t want us reading the book. Probably because it was so taboo and forbidden and something that was frowned upon, it quickly became the book I would read and read again.

Books are like that. If you aren’t supposed to read them – if someone told you that it was bad or forbidden, you tend to gravitate towards it. Happens all the time. On a diet? Bet those Oreos look pretty fucking good right now. Gave up wine for Lent? God, would I kill for a glass of Merlot. This book is off limits? Sounds intriguing . . . where can I get a copy? Books have always been like that for me. If it seems like everyone else is enjoying it, I probably won’t even look sideways at it. Water for Elephants never really piqued my interest. John Grisham . . . tried him once. Anything by Jodi Picoult looked odd to me.

So now that E. L. James’ Fifty Shades of Grey is all over the best seller charts, I just can’t bring myself to do it. And it seems like I should be all over it, right? Erotica on the best seller list. S & M. Completely taboo and forbidden. Problem is . . . the writing is clunky and schlocky, so I can’t read it. Trust me, I’ve tried. I’ve read the samples (hell, I even downloaded the sample from iBooks because it’s bigger), looked at the excerpts online, looked at interviews with the author, and I just can’t bring myself to be interested in it. So what do I read? Probably not what you expect a 42-year-old to read. Maybe it’s because I teach 7th grade, but I tend to read what my students are reading. Part of it is to stay up on current trends and to have an actual conversation about the books they are reading. Part of it is the quality of writing. There isn’t a lot of pyscho-babble bullshit in the books that I read. Sure, there’s subtext galore, but there’s not a lot of “oh, I’m finding myself after being this or that for the past 30 years” when your protagonist is 16-years-old. But the biggest part? I kinda like the romantic bits a whole lot better not for what they include but for what they lack . . . my imagination is as twisted as it needs to be, so I don’t need anyone else telling me about the “turgid member pulsating beneath his wet towel.” Thanks but I can do better than that with a migraine. Reading what I wanted has always been a part of me. Trust me . . . a lot of what I read is pure crap (chick lit . . . love it! Jane Austen . . . can’t get enough. Any variation on Jane Austen . . . sign me up. Best seller lists? Ehhh . . . fuck it). I guess that’s why if a kid is reading a magazine on how to beat their favorite game, I’m pretty okay with it since they are reading – but pick up a book every once in a while to get some practice on plot for god’s sake. I am a teacher after all. 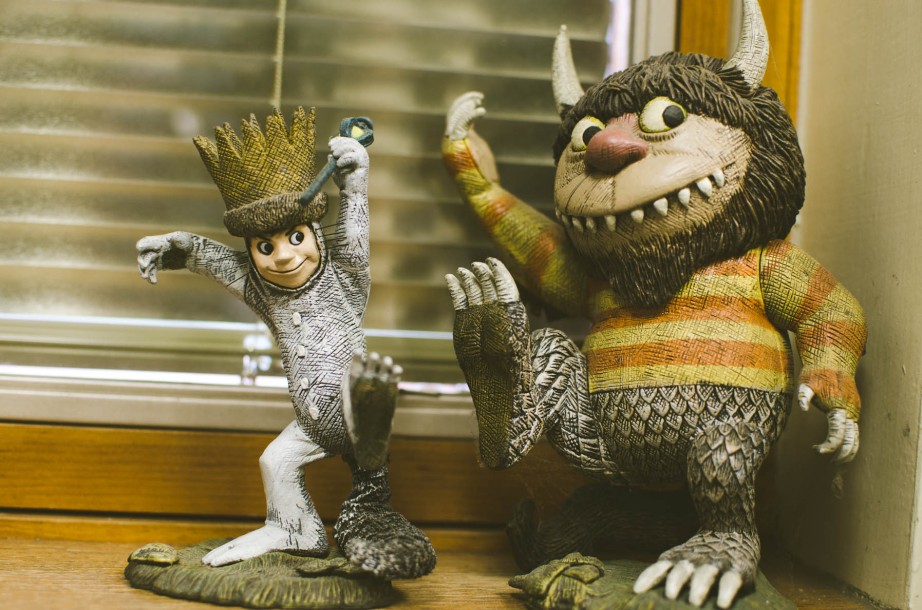 The first book that I bought when I found out I was pregnant was Where the Wild Things Are, and I read it to the Girls all the time. There aren’t many words, and it takes all of five minutes to read. The pictures are typical of Sendak – dark and weird and never afraid to let a kid let her imagination run wild. But the thing that I always admired about the book was the one thing my mother never got: when Max got tired of having wild rumpuses and being king of the Wild Things, he came back to his room and a dinner that was still hot . . . all because a mother allowed him to let his imagination run wild.

How does your imagination run wild? Anything that would boggle my mind? Or do you just have a book to suggest for me? I am trying to read more fiction adult oriented books (yup . . . I’ve got a thing for non-fiction, too) so suggest away.