Yup, we’re a little late getting the month started on O + U. Could be the nice weather, but it only became nice in the past few days in my region. Might be all that time I’m spending taking photographs. Only problem? I can’t find the time to process a damn thing without a small “beagleador” on my lap. So it must be all my hobbies, right? Possibly but not really. Turns out I’ve been reveling in being lazy and doing nothing except for reading the occasional book.

Even while I’m reading or falling asleep, the nagging feeling that I should be doing something else keeps pricking at my brain. What’s missing is knitting. Lucy, the aforementioned “beagleador,” doesn’t really like to share my lap. And it turns out that she’s kind of picky about wanting to play since she’s a puppy and all. Knitting, sadly, has taken a seat on the back burner, and it’s a shame considering I have enough yarn to choke a small family. You want silk? Come on over, my love . . . I have mulberry and raw. Merino? Want that blended or pure? Could I tempt you with a little qiviut? Rub it on your wrist . . . or some place else. Tell you what I’ll do. First skein is free. It’s all yours. But the next one? Well, the next one you’ll have to pay for. Sure, with knitting, you’ll start with some lovely Red Heart (and there are some lovely Red Heart varieties) and think, “This sweater will be perfect!” However, you’ll figure out quickly that you can’t block anything because it’s acrylic. So you’ll buy a nice, reasonably priced wool. Later, a friend will show you some cashmere blend, and that’s it. You’re in for the good stuff from then on. You’ll stalk certain indie dyers to try and score just a skein of the goodness. The same friend will send you links on Ravelry for another indie dyer. You’ll go into your attic to retrieve two balls of yarn and realize that you have not one, not two, but six (yes, six) separate sweaters in yarn form just waiting to be knit. 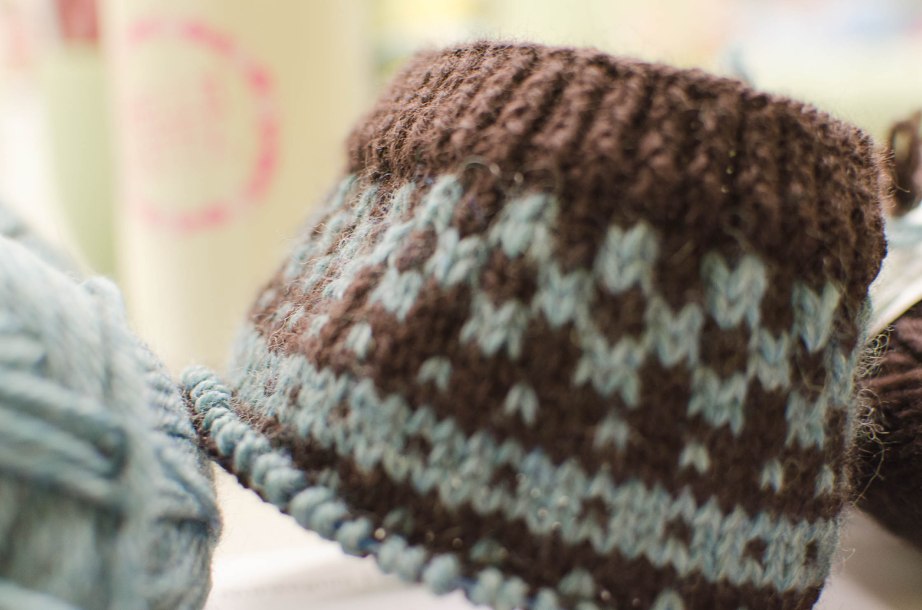 But admit you have a problem? Screw that. Because eventually, you’ll have a sweater. Or a sock (probably not its mate). Could be a scarf. All that yarn? It has potential. There is possibility in a skein. The colors meld with a stitch, and you’ve created something magical. Twist your stitches this way . . . nothing. But twist the other way, and it all pops. Maybe you’ll get ballsy and throw a sweater that’s too big and shrink it a little (I would caution you on this; it often leads to tears and sobbing and hyperventilating and booze . . . lots and lots of booze). Save the big one – cutting your sweater – for last. Because after you do that, it’s all downhill from there. 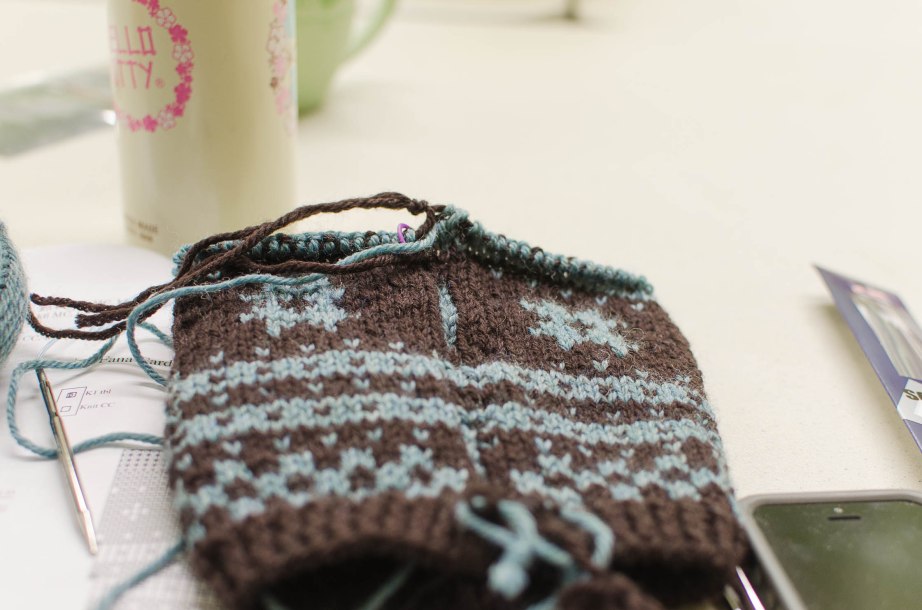 So why knit? It can be a relatively cheap craft. You can get wool sweaters at most thrift stores and unravel them if you like. There are plenty of small projects out there that take a small amount of yarn. A skein of sock yarn can go pretty far if you’re creative. And if you’re not creative . . . buy a pattern and get to it. Knitting will keep you focused, for the most part. You focus on the stitches and let the rest of your thoughts melt away. Nothing will destress me faster than the garter stitch. Knit a row. Turn it around. Knit another row. Repeat. But if I need to stop from thinking of anything, give me a complicated lace pattern. Because if I have to think about a pattern, chances are I can’t think about anything else. Sometimes, that’s the best part.